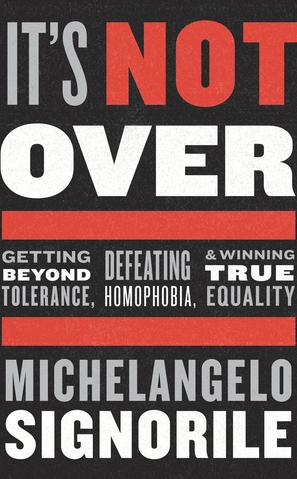 ABOUT IT'S NOT OVER

Marriage equality has surged across the country. Closet doors have burst open in business, entertainment, and even major league sports. But as journalist and advocate Michelangelo Signorile argues in his most provocative book yet, the excitement of such breathless change makes this moment uniquely dangerous.

Puncturing the illusion that victory is now inevitable, Signorile confronts truths that have been hiding in plain sight, and marshals new research and stinging evidence to reveal just how deep America’s current of homophobia runs — and how it still evades our efforts to eradicate it. He journeys into the heart of the conservative political machine to expose the religious right’s renewed and rebranded backlash against gay rights. And with the piercing insight born of decades of reporting, Signorile offers an incisive critique of Washington, the media, and Hollywood, challenging the hypocrisy of supposed allies whose complacency has become a roadblock to progress.

Not just a wake-up call, It's Not Over is also a battle plan for the fights to come in the march toward equality. Signorile tells the inspiring stories of lesbian, gay, bisexual, and transgender Americans who have refused to be merely tolerated, or worse, and are demanding full acceptance. And he documents signs of hope in schools and communities finding new ways to combat ignorance, bullying, and fear. Urgent and empowering, It's Not Over is a much-needed book from one of our most electrifying voices.